It is different from communication.

Language is the way we communicate,

a system or method of communication.

We use words to convey actions, thoughts, & feelings.

Language is a universal element. All peoples of the world use language to communicate.

Any child born anywhere is capable of acquiring any language…

The human brain seems to be pre-wired to learn language in general, and able to adapt specifically as needed. The language(s) learned depends on the child’s environment in the first few years of life. In many places in the world, the child’s early environment results in bilingualism.

As they study global languages, linguists look for universals in categories such as: sounds, words, sentences & meaning.

In studying these elements of global languages, linguists have found similarities, as well as differences.

So what is it exactly that makes language distinct? 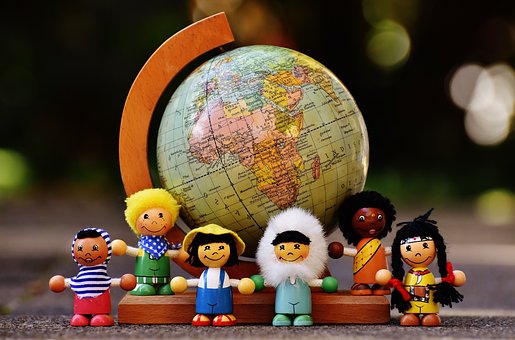 First, language is a creative process. In  An Introduction to Language, university professors of linguistics define language as “a system that relates sounds or gestures to meaning.” They emphasize the creative aspect of language by reminding their students we “speak & understand sentences [we’ve] never heard before all the time.”

The novelty of the sentences we speak & hear on a daily basis is only one aspect of our creative ability. In order to understand & speak language, we also acquire a knowledge of sounds & words that are language-specific, as well as meanings associated with both.

In the animal studies that have explored language development a rare few have led to speech production. As of yet, none have led to the invention of creative & original speech.

Next, language is unique to humanity. Animals communicate, but they do not use human language to do so. Our dogs bark to warn us when a situation seems threatening. Bees dance, successfully transmitting messages as they work together. Dolphins whistle & birds sing, each interacting in the unique way of their species, but speech is distinctly human.

The Complexity of Conversation

The Need for Clarity in Conversation

Content & quotes in this post are from Chapter 1 of a previous edition of this textbook and attributed to the work of its’ amazing authors: Victoria Fromkin, Robert Rodman & Nina Hyams. It’s a great resource if you are interested in learning more about linguistics.